As most people know, dogs evolved from wolves.  Whilst wolves and dogs are still the same species and can interbreed, our dogs’ ancestors evolved from the wolf a long time ago, not as hunters, but as scavengers around human settlements.  Scavengers have no need to hunt cooperatively as a pack and therefore dogs have less need for a complex social organisation than wolves.  Interestingly, domestic dogs have smaller brains than wolves with a reduced ability to problem solve.  The propensity for domestication to select for people pleasing juvenile characteristics has shrunk the dog brain, a process known as ‘neotany’.

The theory that wolves (and therefore dogs) live in a ‘dominance hierarchy’ was based on studying groups of unrelated wolves in captive situations.  It seems that unrelated, captive wolves tend to fight amongst themselves and compete over resources.  This has led to the theory that wolves live in a ‘dominance hierarchy’.  However, this was only ever a theory, most respected authorities (including David Mech who’s therory it was) now believe that wolves live in family units, rather than in large packs  and that there is no formal, ‘linear hierarchy’.

So dogs are not wolves and whilst their social organisation resembles that of wolves it also resembles our own.   Dogs live in families rather like human families – hence we fit so well. Generally these family groups live in harmony but when competition for resources gets too in intense there will be conflict and usually the younger members of the family will disperse to seek new pastures and ultimately form families of their own.

Of course, dominance relationships do exist; ‘dominance’ is a scientific term to describe the relationship between two individuals who know each other and have a relationship – a ‘dyad’.  However, there is no evidence that any individual is born ‘dominant’ and out to dominate everyone, both dog and human from that point onward, although of course, some dogs just like some people, are pushier than others.

Modern dogs generally live in family groups, usually consisting of humans, dogs and often other animals too.  Family dogs will have an individual relationship with everyone in the family, whether dog, human, cat or another species.  It’s true that some dogs will compete harder for some things and perhaps dominate those interactions.  For example, between, Rover and Spot, Rover will always get the ball.  He is bigger, stronger, faster and not inclined to share – it’s a no brainer, however in other contexts little Spot knows just how to work it.

Dominance-based training methods as advocated by some dog trainers assume that many problem behaviours are motivated by an inherent desire for that individual to be dominant.  They often focus on suppressing the unwanted behaviour by using harsh training methods.  These training methods can often appear to work, but the results are often short-lived, as the suppressed behaviour is likely to rear its ugly head again, possibly worse than before.  This can also be dangerous, for example, if fear is the underlying emotion prompting aggressive behaviour then harsh training methods are likely to frighten the dog still further and they may react with more extreme aggression or simply ‘shut down’.  A ‘shut down’ dog may no longer be aggressive but they are certainly not happy or ‘cured’!  A properly qualified behaviourist will observe the situation and apply their knowledge in an attempt to understand the underlying issues contributing to the problem behaviour and work from there. 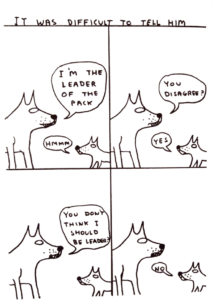 If you think that your dog is being dominant’ it is likely that there is another explanation for the behaviour.  Getting to the bottom of why your dog is doing what they’re doing is the first step towards constructively dealing with it.